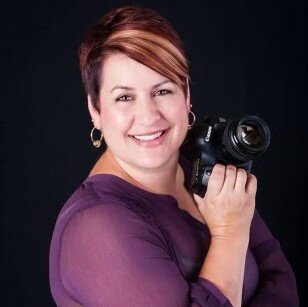 Please share a memory of Jennifer to include in a keepsake book for family and friends.
View Tribute Book

Jennifer Renee Wrobel was born on September 9, 1981 in Garden City, Michigan.   She was the daughter of Jerome "Jerry" Thomas Wrobel and Debra Sue (Milton) Wrobel.   Jen graduated in 1999 from Southgate Anderson High School and in 2010 she earned her bachelor’s degree from Wayne State University.

For five years she taught first and second grade at the Detroit Academy of Art and Sciences (DAAS).   She married the love of her life, Miguel Andres Angel, on February 13, 2010 at St. Constance Church in Taylor.   She chose to step away from the school to start a family.   In 2013, she completed her Master’s Program in Special Education from Madonna University and also began her own business, Angel Photography Studio.   Although, photography had begun as a hobby, her passion quickly became a successful business venture.

In 2015, the young family began camping and wanting a better environment for their girls fell in love with the country.   They soon made Dundee their forever place purchasing their homestead in 2017.   The location became known as Halo Farm and Barn, a venue, in which to host weddings and other special events.   The farm also became the home base for the photography business with many shoots occurring right on site.   Jen often built her own real sets bringing in buses, air streams, and even Santa.   She was generous with her time and treasures often providing free photos sessions for EMS, Police, and Fire.   The farm became a central location for a plethora of community events from trunk or treat, to tying shoots to community outreach, such as collecting food for the Oaks of Righteousness, pet supplies for the Humane Society, or school supplies for back to school.   She was a community activist through and through from spearheading school ground cleanups to beginning an organization called Kids for Kids, to teach them about how to give back to the community.   Jen found a way to provide whatever was needed.

Wherever, Jennifer went her girls were in tow.   She was loving and caring always placing their needs first.   She encouraged her girls to be their own people to express themselves creatively with their hair and clothes.   The “cool” mom, music and dance was a huge part of the family life.   It was quite common to have many visitors over to the home sometimes having a dozen or more girls over for slumber parties.

In 2021, Jen, had started the process of getting recertified as a teacher in hopes of obtaining a permanent position.  She spent her time at Dundee Elementary School where she could stay close with her babies and play an integral role in their education.   Jen was an avid fan of her husband also supporting him in his own endeavors as he created his Food Truck and Restaurant business, "Cilantro".

Jennifer Renee Angel, age 41, of Dundee passed away on Sunday; September 11, 2022 at ProMedica Toledo Hospital.   At her passing, Jen, continued to be a light in this world by helping others as an organ and tissue donor through Community Tissue Services.   Her passing was preceded by a daughter:  Lucinda Angel in 2013.

To cherish her memory she leaves her beloved husband:  Miguel Andres Angel of Dundee; three beautiful daughters:  Lilliana, Isabella, Lucia; her parents:  Jerry and Debra Wrobel of Flat Rock; a brother:  David Wrobel of Seal Beach, California, whom she was very close to; many nieces and nephews; and many, many animals including dogs, cats, goats, and chickens.

In lieu of flowers, memorials are suggested to the Humane Society of Monroe County.   Online guests may leave words of inspiration and comfort or share a photo by visiting www.merklefs.com.

To send flowers to the family or plant a tree in memory of Jennifer Angel, please visit Tribute Store
Friday
16
September