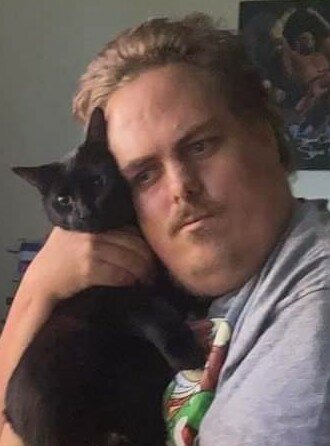 Robert Douglas Rockey was born on September 10, 1995 in Ann Arbor, Michigan.   He was one of two, children born to the union of Michael Rockey and Juila Anne (Loper) Lafferty. Robby attended Monroe High School graduating with the class of 2014.   He was a member of The House of Restoration in Monroe, Michigan where he loved to participate in worship often visiting on Tuesday, Friday, and Sundays.   He also attended the crossroads program at the Crossroad Club House in Monroe.

Robby loved to ride his bike and could often be seen peddling around Monroe. He enjoyed playing video games and was especially fond of Grand Theft Auto or any game that featured WWE wrestling.   An avid wrestling fan he frequently cheered on his favorite superstars:  John Cena and Roman Reigns.   Robby was quite fond of his furry, feline companion:  Mister Bear.   The two had a special bond and Robby had the uncanny ability to make the cat talk.

Robby also liked to watch Major League Baseball.   He cheered on his hometown team the Detroit Tigers through thick or thin, never losing faith in their ability to perform.   From a young age, Robby, had a fascination with the purple dinosaur, Barney.   He often could be witnessed singing and dancing along to the beat.   His love for music didn’t end there he was quick to grab the mic on karaoke night often belting out the lyrics to his favorite all-time song “Sweet Caroline” by Neil Diamond.

Friends may gather from 2:00pm until 6:00pm on Wednesday; August 17, 2022 at The House of Restoration 832 South Roessler Street; Monroe, Michigan 48161.   A Celebration of Robby’s Life will be held at 6:00pm also at the church with Pastor David Besedich officiating.  Cremation will follow through Covenant Cremation of Erie, Michigan.   His care has been entrusted to Merkle Funeral Service, North Monroe; 2442 North Monroe Street, Monroe, Michigan 48162 (734) 384-5185.

For those desiring, memorial contributions are suggested in Memory of Robby to his family.   Online guests may leave words of inspiration and comfort or share a photo by visiting www.merklefs.com.

To send flowers to the family or plant a tree in memory of Robert Rockey, please visit Tribute Store
Wednesday
17
August