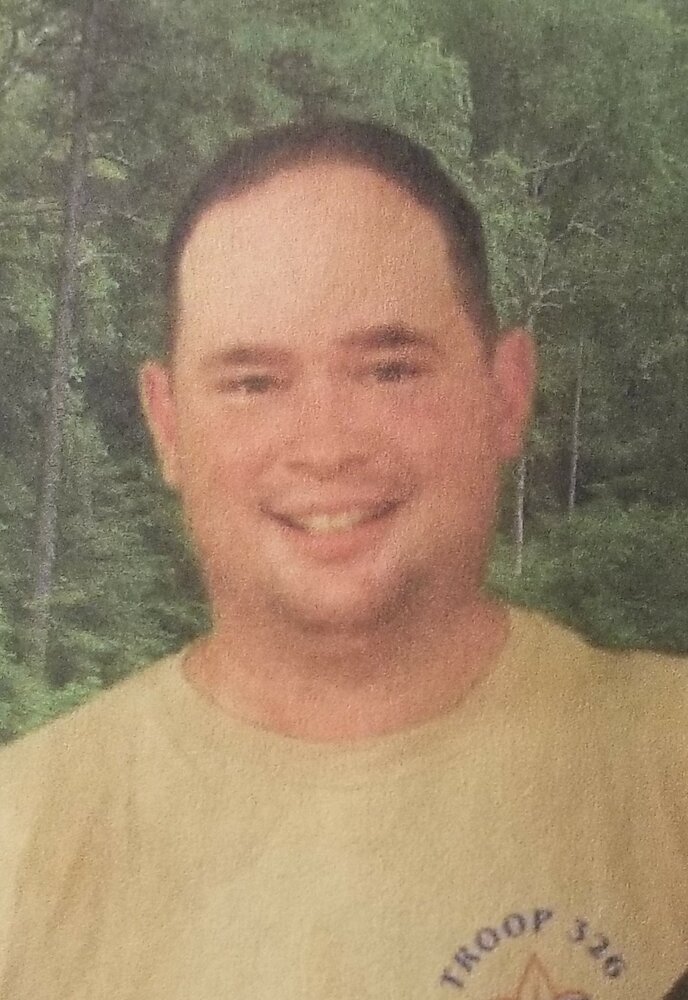 Please share a memory of Ronald to include in a keepsake book for family and friends.
View Tribute Book

Ronald Thomas Brunt was born on August 9, 1966 in Fort Lee, Virginia.  He was the son of Nora Lynn (Steger) Brunt, Ronald Leon Brunt, Dee Allen Slate, and Sandra Lorene Slate. His passion for scouting began at an early age when Ron joined the Cub Scouts. His love for scouting grew when he attended Wright's Lake Scout Reservation as a young scout only then to come back for many years as a camp counselor. At the age of 17, through hard work and dedication, he achieved the rank of Eagle Scout while a member of Troop 511 in Dundee, Michigan.  Ron graduated from Dundee High School with the Class of 1985 and joined the United States Army in August of 1988.

Ron was a proud member of the U.S. Army Military Police. He was stationed at Fort Sheridan, Illinois. While on duty, he met the love of his life, Joy Lynn Weis. A year later, they married at Fort Sheridan Chapel on January 28, 1989. Ron was deployed during Operations Desert Shield and Desert Storm. He was a patriot and valued the sacrifices of our military. Ron personally made it a priority to pause and remember the fallen, celebrate their victories, and instill in those around him a love of country.

Returning home from Desert Storm, Ron continued his education at Washtenaw Community College earning an Associate Degree in Law Enforcement. He became a retail manager for many years. It was during this time that Ron and Joy had three beautiful children, Thomas Matthew, Makayla Joy, and Madeline Rose.

Ron always knew he was destined to operate a Boy Scout Camp. In August of 2007, Ron became the Ranger of Camp Teetonkah and later became the Program Specialist for Camp Munhacke in 2013. He fulfilled his dream of being the Camp Director of Cub Scout Resident Camp. Ron was most excited for a well-received, camp cooking program to teach younger scouts how to cook. Among Ron's scouting achievements are the Bridge Builder Award with the Running Waters District, Vigil member with the Order of the Arrow, the District Award of Merit with the Pathfinder District, and the Silver Beaver.

A master at cooking over a campfire, using a Dutch oven, and smoking meats, Ron loved to feed everyone and enjoyed watching cooking shows. His favorite holiday was Thanksgiving, and he looked forward to hosting a large gathering with several turkeys and all the fixings.

Each of the Brunt children were active participants in Scouting and they all earned the highest ranks in the Boy Scouts and Girl Scouts. Some of their most cherished memories revolved around camping and scouting experiences. Together, they explored our great country visiting several National Parks including Yellowstone, Grand Teton, Mammoth Cave, and the Great Smoky Mountains. They also shared a love of history, taking them to Mount Vernon, The White House, and Civil War battlefields including Gettysburg and Shiloh. Camping the Straits of Mackinac, visiting Mackinac Island, and cruising through points in the Caribbean including Puerto Rico were all memorable experiences.   Wherever Ron traveled, he was on the lookout for the infamous “Bigfoot” whom he wholeheartedly believed was lurking somewhere deep in the forest.

To send flowers to the family or plant a tree in memory of Ronald Brunt, please visit Tribute Store
Sunday
14
August

Lie In State for Ronald Brunt

Mass of Resurrection for Ronald Brunt