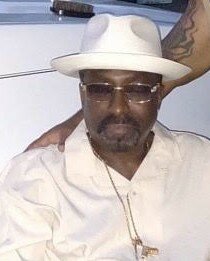 Christopher Anderson Epps was born in Monroe, Michigan on April 24, 1960.   He was born from the union of Floyd Epps and Jerlean (Hoye) Smith.   He received his education from Monroe Public Schools later obtaining his GED from Monroe High School.

Christopher married the former Sonya Renee Jones on September 11, 1995.   He would be blessed with two children of his own and two stepchildren.   For ten years he was employed in construction as a Laborer.

Christopher loved the fresh air and making the most of the Michigan Summers.   He spent some of his favorite time along the banks of Lake Erie dropping a line to catch whatever was biting that day.   Although, he enjoyed his peace and quiet, Christopher truly valued conversation and the company of others.

As a self-proclaimed “old soul”, Christopher appreciated watching classic movies and listening to old-time music.   Even though he wasn’t the best dancer, Christopher was quick on his feet, often stating he was “cutting a rug” when moving along to his favorite tunes.   He swayed to all genres of music and on rare occurrences might even be caught singing to country music while he danced.

He valued first impressions, taking special care of his personal appearance, always making sure to dress to the hilt.   His favorite clothing style was that of “gangsta”, topping off all his outfits with flair making sure at the very least, he included a hat and freshly polished shoes.

Christopher Anderson Epps, age 62, of Monroe, passed away unexpectedly on Sunday; July 31, 2022. His passing was preceded by his father: Floyd Epps and a brother: Clinton Epps.

Friends may gather on Sunday; August 7, 2022, from 2:00pm until 4:00pm at Merkle Funeral Service, South Monroe; 14567 South Dixie Highway, Monroe, Michigan 48161 (734) 241-7070. A Homegoing Celebration will take place at 4:00pm also at Merkles led by Pastor Heather Boone of the Oaks of Righteousness Christian Ministries Center.   Cremation will follow through Covenant Cremation of Erie.

To send flowers to the family or plant a tree in memory of Christopher Epps, please visit Tribute Store
Sunday
7
August