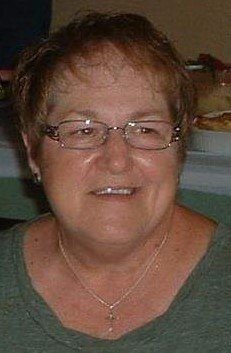 Judith Ruby Fruchey was born in Monroe on March 22, 1948.   She was one of four children born to the late James and Arleen (Hasley) Fruchey.   Judy attended Ida High School graduating with the class of 1966.

She married Carl W. Burkey in 1967, and the couple would be blessed with the birth of three children:  Amy, Arleen, and Carl.   For many years, Judy, cared for the needs of her family as a homemaker.   Later in life, Judy would provide for herself in different capacities.  She was employed as a bartender for several years, as a cook at the Immaculate Heart of Mary, and for the past few years was employed by Arleen and Tony’s family business as a custodian.

Judy loved bingo often playing two to three nights per week usually with Arleen in tow.   She also enjoyed tending to the garden and cooking, passing her gift of amazing meals to her children as well.   As her health deteriorated over the years, she occupied her time crocheting, playing games on the computer, and keeping up with loved ones and friends on Facebook.   More than anything, Judy enjoyed spending time with family.

Judith “Judy” Ruby Burkey, age 70, of Monroe passed away at home on Tuesday, December 4, 2018.   In addition to her parents her passing was preceded by her son:  Carl James Burkey on April 20, 1996, nephew: Ronald McClure; and sister-in-law: Shirley Fruchey.

Friends may gather from 2:00pm until 6:00pm on Sunday, December 9, 2018 at Merkle Funeral Service, South Monroe; 14567 South Dixie Highway (734) 241-7070.   A Celebration of Her Life will follow at 6:00pm also at Merkle’s with Reverend Roy Southerland Pastor of Monroe Missionary Baptist Church officiating.   Private burial will take place at St. Joseph Cemetery in Monroe at a later date.

Memorials for those who desire are suggested to ProMedica Monroe Hospice.   Online guests may leave words of inspiration and comfort or share a photo by visiting www.merklefs.com.