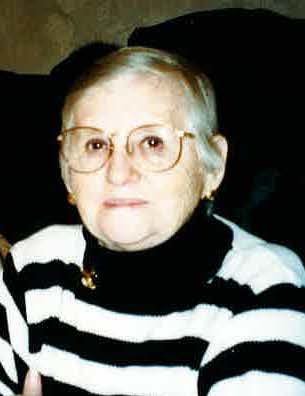 Evelyn June Farner was born in Monroe, Michigan on June 30, 1929.   She was one of seven children from the union of the late George Calvin Farner and the late Leona Marie (Sanders) Farner.   Evelyn attended Monroe High School and graduated with the Class of 1947.

She met the love of her life, Patrick Lewis, and the couple were married on January 12, 1952 in Monroe.   From this union came the birth of three children.   Evelyn cared deeply for the needs of her husband and children.   She had a devout passion for serving others, and enjoyed working with the mentally challenged, including her own granddaughter.   This desire to help led to a position with the Monroe County Intermediate School District as a Teacher’s Aide which she proudly served for five years.

Evelyn stayed active, playing cards and other games with friends every Tuesday evening.   A skilled woodworker, Evelyn enjoyed operating her own bandsaw to complete projects.   The ultimate bargain shopper, she was sure to be found at every garage sale she noticed.

While not religious herself, Evelyn respected the values, beliefs, and observances of various religions.   A wonderful mother and grandmother, Evelyn taught these values to her family and raised them to respect the Golden Rule.   She brought a certain level of calmness and strength to those around her.

Evelyn June Lewis, age 88, of Erie passed away at 2:50am on Sunday, May 28, 2018 at her home under the care of Grace Hospice.   In addition to her parents, her passing was preceded by her beloved husband of sixty years:  Patrick on November 29, 2012; her son: Timothy Paul Lewis; her daughter-in-law: Carol E. (Carrier) Lewis; four sisters: Marge Sells, Doris Nisely, Patricia Eldridge, and Nancy Diehl; and one brother: William Farner.

Online guests may leave words of inspiration and comfort, share a photo, or send a floral arrangement by visiting www.merklefs.com.