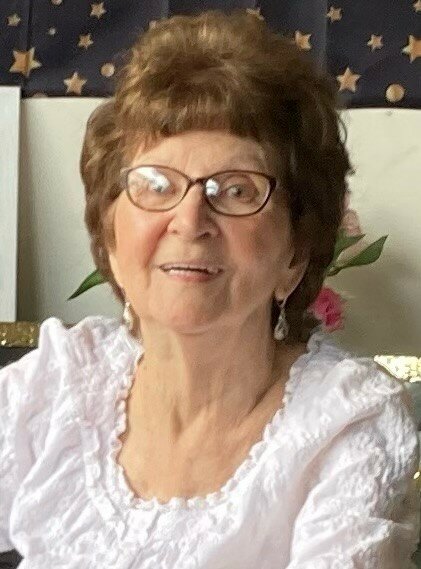 Please share a memory of Nell to include in a keepsake book for family and friends.
View Tribute Book

Nell Marie Little was born on June 10, 1932, in Wheelright, Kentucky. She was the eldest of four children born from the union of Marion and “Birdie” Berta (Holbrook) Little. Nell would graduate high school and enroll in college courses, completing one year of higher education.

She married the love of her life, Myron Strube on December 10, 1955, at Epiphany Church in Detroit. The couple was blessed with the birth of six children. Nell understood the value of being a stay-at-home mom and being present in the lives of her children each and every day. She gladly tended to their every need and was honored to provide a home cooked meal for them daily.

As a young woman, Nell could be seen bowling at Nortel Lanes or shouting BINGO at the local hall in search of a jackpot. She and Myron often met up with friends: Jack and Dottie to play a spirited game or two of Pinochle. The couple also frequented Downtown Detroit’s Greektown Casino for a little gambling but mostly to savor a meal from their favorite restaurant, Prism.

Although she wasn’t a sports fan, Nell never missed an opportunity to catch a tennis match or two on television, especially if Pete Sampras, Roger Federer, or Rafael Nadal were playing.   She also could be seen tuning in to watch the Game Show Network or catching old episodes of the Match Game.

Above all else, Nell loved the Lord.  She enjoyed listening to worship music and feisty debates on end times. She treasured and cherished her family. She looked forward to spending any time she could with those she dearly loved. From checking out the Northern Michigan fall colors while driving to Traverse City to camping around any of the lakes Michigan had to offer. She and Myron had a large tent that became known as the girl’s tent and a pop up camper where the boys would sleep in “luxury”. They spent much time traveling to Nashville, Mesquite, Nevada and Out West to explore many cities in our great nation. The entire family also frequented Port William, Ohio to visit Nell’s mother.

Nell M. Strube, age 90, of Monroe, passed away at 8:07pm on Sunday; November 6, 2022, at ProMedica Monroe Regional Hospital.   Her passing was preceded by her parents; her mother-in-law: Esther Kress; a brother: Lloyd Little; a sister-in-law: Marlene Little; and one great grandson: Ezio Rivera.

Memorial contributions are suggested to Trinity Lutheran School in Monroe.   Online guests may leave words of inspiration and comfort or share a photo by visiting www.merklefs.com.

To send flowers to the family or plant a tree in memory of Nell Strube, please visit Tribute Store
Saturday
12
November

Look inside to read what others have shared
Family and friends are coming together online to create a special keepsake. Every memory left on the online obituary will be automatically included in this book.
View Tribute Book
Share Your Memory of
Nell
Upload Your Memory View All Memories
Be the first to upload a memory!
Share A Memory
Send Flowers