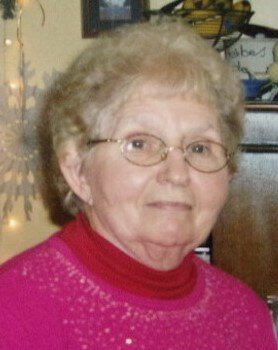 Please share a memory of Thelma to include in a keepsake book for family and friends.
View Tribute Book

As a young woman, Thelma was employed at Gruber’s Grocery Store in Monroe. She and Melvin enjoyed fifty-six years of marriage and were blessed with four sons and two daughters. The couple seemed to always be together, they certainly were two of a kind.

The “House Manager”, Thelma devoted her life to caring for her husband and children. The family spent several years living on Wright-Patterson Air Force Base, where Melvin was stationed. With the help of their family, Melvin constructed the family home on Petersburg Road.   Thelma always ensured the group was well fed while working those long months and baked a special dessert to be enjoyed each weekend.   She later kept herself busy by working at various employers including Ace Hardware and McDonald’s.

A devout Catholic, Thelma was an active parishioner of St. Irene Catholic Church in Dundee, Michigan.   Each Saturday she met after Mass with a group of ladies for dinner.   Thelma also looked forward to mingling with a group of former McDonald’s co-workers monthly and on their birthdays.

Often joined by her sisters and their spouses, Thelma and Melvin loved traveling to destinations including Florida, Hawaii, and Puerto Rico as well as Las Vegas, Nevada and Branson, Missouri.   She enjoyed completing jigsaw puzzles and crocheting afghans.   A minimalist, she was very thrifty and lived simply.   She was known for her strong will and was never afraid to express her opinion.

Friends may gather on Thursday; October 13, 2022 from 2:00pm until 7:00pm with recitation of the Rosary at 6:00pm at Merkle Funeral Service, Dundee; 297 Tecumseh Street, Dundee, Michigan 48131 (734) 529-3156.   Thelma will lie in state from 10:00am until the time of the Mass of Resurrection at 11:00am on Friday; October 14, 2022 at St. Gabriel Parish, St. Irene Catholic Church, 576 East Main Street, Dundee, Michigan 48131.   Procession will follow to Maple Grove Cemetery in Dundee for burial. Family and friends are invited to join the family immediately following at St. Irene’s Catholic Church for lunch and fellowship.

Memorial contributions may be directed to St. Gabriel Parish or the Dundee Area Senior Citizen Center. Online guests may leave words of inspiration and comfort or share a photo by visiting www.merklefs.com.

To send flowers to the family or plant a tree in memory of Thelma Smith, please visit Tribute Store
Thursday
13
October

Lie In State for Thelma Smith

Mass of Resurrection for Thelma Smith

Look inside to read what others have shared
Family and friends are coming together online to create a special keepsake. Every memory left on the online obituary will be automatically included in this book.
View Tribute Book
Share Your Memory of
Thelma
Upload Your Memory View All Memories
Be the first to upload a memory!
Share A Memory
Send Flowers