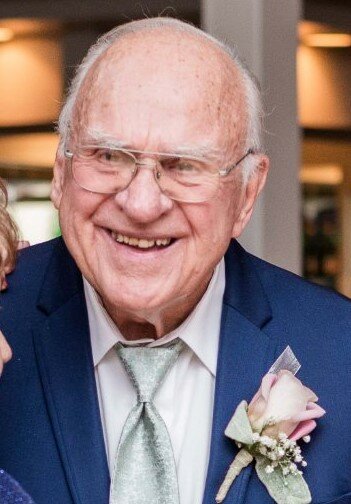 Please share a memory of Michael to include in a keepsake book for family and friends.
View Tribute Book

Michael Bernard McLaughlin Jr. was born July 19, 1934 in Mt.Clemens, Michigan. He was one of five children born to Michael and Dorothy (Houthoofd) McLaughlin Sr.  Michael attended St. Mary’s High School in Mt. Clemens, Michigan graduating with the class of 1952.  After high school Michael enlisted into the United States Marine Corp where he received an honorable discharge during the Korean War era.  Upon Michael’s honorable discharge from the Marine Corp, he was able to attend Eastern Michigan University in Ypsilanti, Michigan on the GI bill. He worked for Jones Transfer prior to his years of employment at Ford Motor Company as a Supervisor in the material handling department, from where he retired in 1994.

On August 31, 1957, at St. Mary’s Catholic Church in Monroe, Michigan Michael would marry the love of his life; the former Ms. Rita Karen Ainslie. Together the couple would be blessed with three handsome sons; John, Daniel, and Patrick and two beautiful daughters; Erin and Kathleen.  Mike was a member of the Knights of Columbus Council #1266 in Monroe, Michigan. Mike and Rita have been longtime parishioners of St. Michael the Archangel Church in Monroe, Michigan.  Mike was a true outdoorsman and enjoyed fishing for perch on Lake Erie, cycling, walking, canoeing, and hunting near Jackson, Michigan for deer. He was fortunate to take a trip one year to Montana to hunt elk.  He loved working in his yard, attending to his flowers and trimming his bushes.  He took great pride in his lawn. He was a true family man and will always be remembered as a great husband, father, and grandfather.

Michael Bernard McLaughlin Jr. age 87 of Monroe, Michigan passed away Thursday July 7, 2022, at home surrounded by his loving family and under the loving care of Elara Caring Hospice. His passing was preceded by his parents; Michael and Dorothy McLaughlin Sr.; his son Patrick in 2016 and his sister; Dororthy McLaughlin.

Friends may gather on Tuesday July 12, 2022, from 2:00pm until 8:00pm at Merkle Funeral Service North Monroe; 2442 North Monroe Street, Monroe, Michigan 48162 (734)384-5185. Michael will lie in state from 10:00am until the Mass of the Resurrection at 11:00am at St. Michael’s the Archangel Church 502 West Front Street Monroe, Monroe, Michigan 48161, with Father David Burgard as the celebrant.  Cremation will take place through Covenant Cremation of Erie, Michigan.

For those desiring memorial contributions in Michael’s name can be made to St. Jude Children’s Research Hospital.  Online guest can leave words of comfort and inspiration or share a photo by visiting www.merklefs.com

To send flowers to the family or plant a tree in memory of Michael McLaughlin Jr., please visit Tribute Store
Tuesday
12
July

Mass of the Resurrection for Michael McLaughlin Jr.