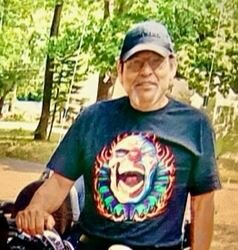 Please share a memory of Abelardo to include in a keepsake book for family and friends.
View Tribute Book

Abelardo “Lalo” Martinez was born on August 13, 1948 in Britton, Michigan to Ruben Martinez and Fabiana (Robledo) Valdez. Lalo attended Erie Mason High School in Erie, Michigan. On November 12, 1966 he wed the former Ramonia Gloria Garcia, whom he had known since the age of fourteen. Together they enjoyed fifty-five years of marriage and were blessed with two daughters. Lalo had been employed as a machinist at Automatic Handling International in Erie for thirty-eight years before retiring in 2016. He previously worked at Neal Products, also in Erie, for thirteen years.

Lalo had been hitting the open road on motorcycles since the age of fifteen. He was a member of the Harley Club and American Motorcycle Association. The proud owner of a Honda Goldwin Trike and a 1989 Harley Davidson Ultra Glide, Lalo rode his bikes across the country. Together with his wife they traveled West on Route 66, North through the Dakotas, South into Mexico and as far East as New York. Every year in July they took a two week long excursion to Northern Michigan, crossing the Mackinac Bridge and through the upper peninsula into Sault Ste. Marie. Closer to home, Lalo’s grandchildren enjoyed riding around town in the sidecar. The Martinez family attended a flea market in Dayton, Ohio every year in search of tools and antiques where Lalo would give each grandchild $20 to spend.

Lalo cultivated a large vegetable garden every summer. Despite agreeing to “keep it small” in the springtime, he couldn’t stop himself from planting more and more seeds. Lalo shared his bountiful harvest, including asparagus and many varieties of peppers, with family and friends. He loved hot sauce and always brought his special seasoning along to every restaurant. With his grandson, Ronnie’s help, Lalo painted outdoor garden statues. He also made yard décor built from bicycle wheels he called “whirly gals”, which his father taught him to build. Lalo frequently tuned into Judge Judy but had to rewatch episodes repeatedly as he’d often fall asleep during the program.

Lalo belonged to The Black Hawks of Ohio and Michigan MC. He also was apart of The Nwoma District 12 and Glass City MC.

Lalo spent his mornings in deep contemplation. He considered it his quiet time and even gave his co-workers fair warning with a sign he jokingly posted. Known as the other “Man in Black”, Lalo always wore black clothing. A “Jack of All Trades”, he was determined to figure out how to fix anything. Lalo took good care of everyone and always found a way to help. When his wife was ill he built her custom shelf near her bedside so she could reach everything she needed.

To send flowers to the family or plant a tree in memory of Abelardo Martinez, please visit Tribute Store
Friday
8
July

Look inside to read what others have shared
Family and friends are coming together online to create a special keepsake. Every memory left on the online obituary will be automatically included in this book.
View Tribute Book
Share Your Memory of
Abelardo
Upload Your Memory View All Memories
Be the first to upload a memory!
Share A Memory
Send Flowers