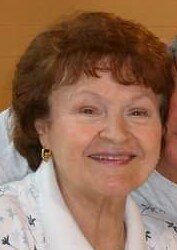 Please share a memory of Jean to include in a keepsake book for family and friends.
View Tribute Book

Jean Marie Holmes was born in Boston, Massachusetts on September 2, 1934. She was one of eight children born to Thomas and Anna (O’Conner) Holmes. Jean met her future spouse while he was stationed in the U.S. Navy in Boston. Three weeks after their first encounter, on July 31, 1955, she wed John “Jack” DeBruyne at the base. They later confirmed their vows at Gate of Heaven Catholic Church in South Boston. Jean and Jack were blessed with six children, three boys and three girls.

For short periods of time Jean was employed at Bay Corrugated Container in Monroe, however, her life’s work was to care for her family. Jean was a member of the American Legion Post 193 Ladies Auxiliary in Luna Pier, Michigan. She enjoyed trying her luck on the slots at Hollywood Casino alongside her daughter and namesake, Jean. A conservative gambler, she would cash out if she were up even thirty cents! Jean also liked to shop; however, she did more browsing than buying. Although Jean enjoyed cooking, she never passed up an opportunity to dine out. She especially looked forward to a meal at R Diner or Front Street Diner in Monroe. The more burnt her food was, the better, as far as she was concerned.

Jean had very eclectic taste in movies and television. She watched everything from Westerns and Sherlock Holmes mysteries to Sci-fi movies, especially Star Wars, and Disney cartoons to old horror movies such as Dracula or Creature from the Black Lagoon.

An animal lover, everyone knew if they brought Jean a lost dog or cat she would welcome them with open arms. She seemingly knew everyone and never met a stranger. Jean could never pass up a baby without fawning all over them. When her grandchildren were young, she would sing to them on the way to school and never let them leave without a full belly. Jean had a very independent spirit which could lead her to be stubborn at times but she was always well intentioned. Jean was a very colorful person and someone you wouldn’t forget if you were fortunate enough to have met her. Seeing her interact with her husband was like watching a comedy routine!