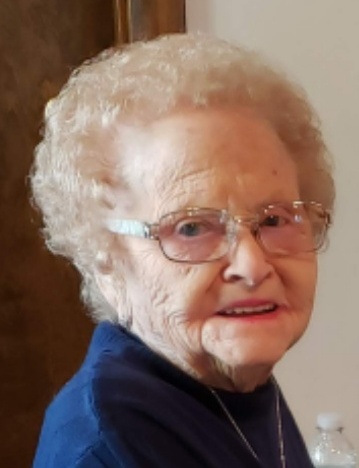 Bonnie “Mamaw” Smith, 97 years old of Monroe, Michigan went home to be with the Lord on Tuesday; January 11, 2022 joining her husband, Lonnie Smith Jr. in Heaven.   She was surrounded by family.

Born on February 20, 1924 in LaFollette, Tennessee to the late Luther and Helen Goins. Bonnie attended and graduated from Coolidge School.   She also later taught at the same school during the war.

On December 27, 1944, she married the love of her life Lonnie Smith Jr. in Middlesboro, Kentucky.   Sadly, Lonnie preceded her in death on May 27, 1997 after 53 glorious years of marriage.

Bonnie was a wonderful homemaker and enjoyed taking care of her family.   She also worked as a teacher, as an aide at Beach Nursing Home, and as the Supervisor of the Toy Department at Rinks Bargain City until her retirement.

Anyone that knew Bonnie knew that she loved the Lord.   She was a charter member of Evergreen Acres Missionary Baptist Church joining on October 7, 1950.   She became the piano player on October 29, 1957 and played for over 63 years until her health declined.   She was often called on to play the piano for many weddings, funeral, and at nursing homes throughout the community.   Bonnie was very dedicated to her church holding positions such as Pianist, Church Clerk, Messenger, Sunday School Teacher, W.M.U. Member, Funeral Dinner Committee, and Deacon’s wife.   She played and sang in several groups over the years most recently with her daughter and granddaughters.   She was also known for sending birthday, get well, and thinking of you cards or making calls or visits to let those around her know that she cared.

Bonnie really enjoyed spending time with her family.   She loved cheering and supporting school and sporting events.   She was an avid Detroit Pistons and Detroit Tigers fan.

In lieu of flowers memorials are suggested to Evergreen Acres Missionary Baptist Church.   Online guests may leave words of inspiration and comfort or share a photo by visiting www.merklefs.com.

To send flowers to the family or plant a tree in memory of Bonnie Smith, please visit Tribute Store
Sunday
16
January