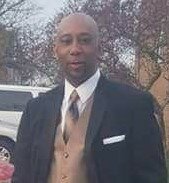 Walter Thomas Barnes was born on December 31, 1966, in Monroe, Michigan.   He was one of ten children born from the union of Cody and Mae (Register) Barnes.   Walter would attend school and graduate from Oak Park High School. He was with his partner, the love of his life, Alicia Page for seventeen years.

As an avid football fan, Walter would never miss an opportunity to attend a game at the Big House in Ann Arbor so he could cheer on his beloved University of Michigan Wolverines.   Born into a large family with many siblings, Walter knew the value of preparing a meal and how it had the ability to bring everyone together, hence he was always willing to cook.  Walter especially took pride in showing off his grilling skills cooking barbecue burgers for everyone to enjoy.   He didn’t mind being the center of attention as long as all of the guests were enjoying themselves.   Whether it was for a Holiday or to watch the latest boxing event on television, he always made certain he had a Heineken in his hand to enjoy.

Above anything, Walter treasured family.   In fact, he was diligent to make daily phone calls to check on his grandkids.  He was just as proud of his nieces and nephews, as well.   He was sure to always provide his physical presence at family events whenever someone extended an invitation.

Walter Thomas Barnes, age 55, of Ann Arbor, passed away unexpectedly on Saturday; December 11, 2021. His passing was preceded by both of his parents and one brother: Cody Barnes.

To send flowers to the family or plant a tree in memory of Walter Barnes, please visit Tribute Store
Monday
20
December