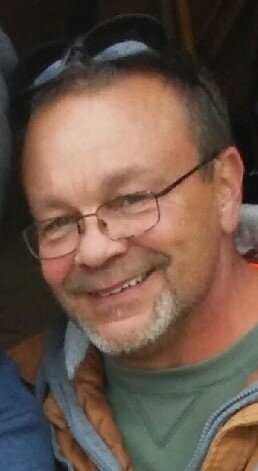 Nick Todd Knezevich was born on February 21, 1962 in San Diego, California, where his father was stationed in the military.   He was the only child from the union of Nickolas Knezevich and Charlotte (Hill) Knezevich.   The family would soon make their way back home to Michigan where Nick would be educated.   He lettered in football, graduating with the Class of 1980 from Monroe High School.

He married his high school sweetheart, the former Marlyse Annette Moyers in 1981.  The couple would be blessed with two children:  Nicholas and Leslie.   Unfortunately, the couple would separate and each go their own ways, however, this would not be the end of their love story.   As a young man he enjoyed firearms, hunting, and fishing.

Nick was an excellent provider, a hard worker, and always more than willing to earn his keep.   For many years, he was a member of the Local 8 out of Toledo.   He attended Electrical Journeyman School in Galveston, Texas.   Nick was employed at Bay Corrugated Container and MAC Steel as a mechanical and electrical supervisor.   He also worked alongside his father Nickolas for many years at Action Electric in Monroe.

Tired of Michigan winters…and taxes, Nick, researched places to live.   He soon found an old, dilapidated trailer on the side of a hill near Somerville, Alabama and in 2008 he made it his home.   He set about the task of making it his own, turning the cow pasture into beautifully manicured lawns and the new home and workshop were his retreats.

Since 2010, he did a considerable amount of travel while employed as a Project Manager for Corr Quest out of Oregon.   In 2014, he would be rejoined in marriage to Marlyse.

Nick was a perfectionist by nature, wasn’t afraid to learn new skills, and was self-taught on many subjects.   He had vision for what something could be and had the skills to see it through.   Always smiling, he could often be heard saying, “Let your gratitude be your attitude!” He took things in stride and his typical response was, “It’s going to be what it’s going to be” or “It is what it is”!   Nick never sat still, he was always on the move in search of the next project or how to improve something.

One of his greatest passions was that of woodworking.   He recently purchased a CNC machine and was looking to starting a new sign business upon his retirement in a few years.   He truly loved his grandbabies.

In lieu of flowers, memorials are suggested to the Recovery Project in Livonia, 20000 Victor Parkway, #100, Livonia, Michigan 48152.   Online guests may leave words of inspiration and comfort or share a photo by visiting www.merklefs.com.

To send flowers to the family or plant a tree in memory of Nick Knezevich, please visit Tribute Store
Sunday
26
September