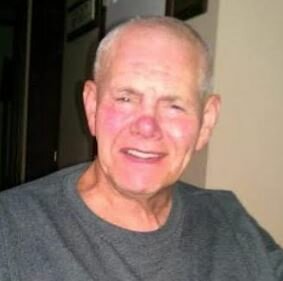 Robert Vernon Redburn was born in Saline, Michigan on August 13, 1948.   He was one of five children born from the union of Robert Calvin and Joyce Eileen (Ery) Redburn.   Robert would meet and later marry the love of his life, the former Mary Jane Aiston on February 8, 1969 in Dundee.   The happy couple would be blessed with the birth of five daughters.   Robert worked many jobs throughout his life to support his family, however, later in his life, he would take a position at Grandma’s Homemade Cookies as a cookie mixer. This is the job he enjoyed the most and would remain working there for more than twenty years.

Robert enjoyed being in the great outdoors. He liked fishing and hunting with his  son in laws in  Coldwater, Alger and St. Helen, even though Robert never brought home a buck, one couldn’t fault him for trying.   Ice fishing on Lake Erie and Grand Beach were also among those memorable times spent with his Grandpa Ery.

Above anything, Robert treasured the time he spent with his grandchildren.   He would actively participate in any endeavor the kids asked of him, from sitting on the floor, assembling Legos to getting on all fours for the children to jump on his back, pretending he was a horse.

Robert was known to be patient and smile,a lot. To know him was to love him.  He valued his quiet time often tinkering in his shed, mostly fixing bikes, until the last few years when he was no longer mobile enough to get in the shed.   Robert was also known to be stubborn, and even after suffering a stroke four years ago, he never gave up trying to walk again.

Robert Vernon Redburn, age 73, of Carleton, passed away unexpectedly at his home on Thursday; September 9, 2021.    His passing was preceded by his parents; two sisters: Penny Nelms and Nancy Anderson; one brother: Tim Redburn; and his “adopted” mother: Selma “Grandma Bootie” Knueve.

Online guest may leave words of inspiration and comfort or share a photo by visiting www.merklefs.com.

To send flowers to the family or plant a tree in memory of Robert Redburn, please visit Tribute Store
Friday
17
September