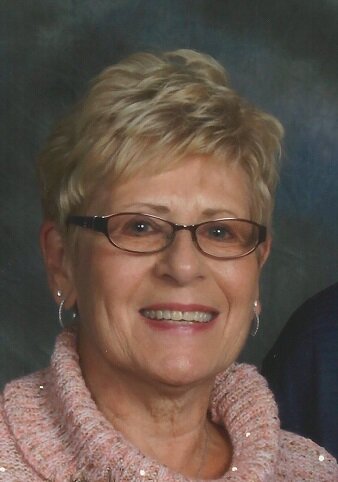 Geraldine Kay LaPrad was born in Monroe, Michigan on February 17, 1942.   She was the youngest of two daughters born from the union of Enos S. LaPrad and Wanda Marie (Matteson) LaPrad.   Geri attended a one room country school on North Stony Creek Road from Kindergarten to Second grade.   She then attended Trinity Lutheran School through Fourth grade and then Jefferson Public Schools through the Eighth grade.   She was confirmed at Trinity Lutheran Church in 1955.   Geri was a 1959 graduate of Monroe High School.  She continued her education at Western Michigan University in Kalamazoo.

During gym class while still in high school, Geri, would meet her future husband Ronald Dean Allen.   The couple would be joined in marriage at Trinity Lutheran Church on July 13, 1963.   From their union would be born two sons, Todd Bryon and Bradford “Brad” Douglas.   She would later be further blessed with two grandchildren.  Geri was a Blue Bird and Campfire girl during her years in grammar school.  While in high school she was a camp counselor.

Geri took employment with Dundee Cement for several years.   She would leave her position to work at the Clerk’s Office for the County of Monroe.   She soon earned the position of Deputy Clerk under Warren Labeau.   Upon Warren’s retirement Geri was appointed the County Clerk and was further elected four more times to her position.   Her career for the county would span thirty-eight years retiring in 2008.

Geri was very community minded and involved serving on the MCOP Board of Directors as a Treasurer, assisting the Monroe Exchange Club with public relations, and had served as a money counter and on the Endowment Fund Committee as Secretary for Trinity Lutheran Church where she was a longtime active member.   She had also been on the board of the Monroe Center for Healthy Aging and served in numerous capacities with the Monroe County Democratic Party.

Geri was always well put-together.   She never left the home unless she had her hair done and dressed to the nines, she was beautiful inside and out.   A social butterfly, she made friends easily and kept them for life.   She enjoyed entertaining, loved to cook, and often took food to shut-ins.   She often could be found passing the time playing euchre at the Monroe Boat Club.

Geraldine “Geri” Kay Allen, age 79, of Monroe passed away on Thursday; August 19, 2021 at Ebeid Hospice Residence in Sylvania, Ohio.   Her passing was preceded by her parents and her step father:   David E. McLain.

To cherish her memory she leaves her beloved husband of fifty-eight years:  Ronald Dean Allen of Monroe; two sons:  Todd Allen (Shawn Satterfield) of Temperance and Brad Allen of Monroe; one sister:  Bonnie Carroll of Huntington Beach, California; many cousins including:  Lauren Merkle whom she was extremely close to; her “adopted” sister:  Barbara Payton of Venice Beach, California; and two grandchildren:  Jonathon Blanke and Nichole Blanke.

Memorials for those who desire are suggested to ProMedica Hospice or Trinity Lutheran Church.   Online guests may leave words of inspiration and comfort or share a photo by visiting www.merklefs.com.

The family wishes to extend a heartfelt thank you to her circle of family and friends and especially cousin Darlene Johnson for all of the wonderful meals and support they provided during her illness.

To send flowers to the family or plant a tree in memory of Geraldine Allen, please visit Tribute Store
Tuesday
24
August