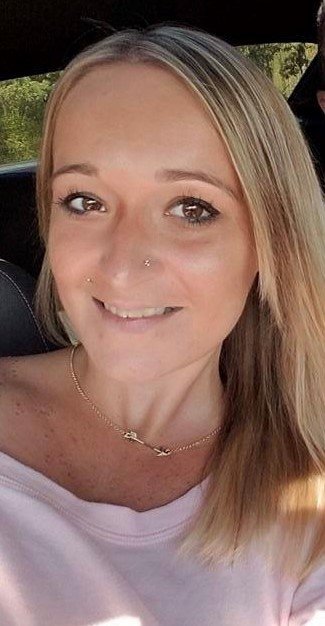 A beloved daughter, wife, step-mother, step grandmother, sister, niece, cousin and friend Ciara Joss (Smith) Neuenschwander (affectionately known as “CJ”), 34, passed away under the care of CHP Hospice along with her family, on Tuesday, July 27, 2021 at the home she shared with her loving husband, Rob Neuenschwander. Born November 29, 1986 in Monroe, Michigan, Ciara was the daughter of Clyde (Shandra) Smith and Janis Smith. Ciara attended Manor Elementary School before transferring to Erie Mason in 7th grade to complete her education, graduating in 2005. Ciara was known for her competitiveness, strong will, and assertiveness, which served her well on the basketball court and softball field throughout the years, earning her awards and Captains honors on several occasions.

Ciara’s love for animals was apparent at a very early age through her frequent visits to the Humane Society and the overdue library notices for her dog book rentals.  That passion continued into her adult years, taking in strays as well as raising and breeding pet foxes with her husband.  Her compassionate spirit didn’t stop there, as she worked at several nursing homes priding herself on going above and beyond to make her residents feel extra special. Her smile lit up a room and she had a quick wit she was never afraid to show, often trading jabs with her siblings when given the chance.

One of Ciara’s favorite places to visit was Ludington, Michigan, where she married the man of her dreams on August 19, 2017 and hoped to one day build a cabin for regular visits and reminders of their special day.  She enjoyed expressing herself through writing, scrapbooking, painting and crafts, which she often shared with family and friends. Ciara’s fearless approach to life gave her some of the best experiences, always showing a willingness to try new things such as hunting, snowmobiling, mudding, and skydiving.

Loved ones that cleared a path for Ciara were her grandparents, Harry & Margaret Longmuir, Norman and Irene Smith, Benjamin and Edith Meeker, as well as several aunts, uncles, and cousins on both sides.

To send flowers to the family or plant a tree in memory of Ciara Neuenschwander, please visit Tribute Store
Tuesday
3
August