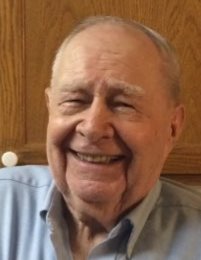 Ralph Jennings Schall Sr., age 91, of Petersburg, Michigan passed away on Thursday, March 19, 2020, at the Sisters Servants of the Immaculate Heart of Mary Rehabilitation Center in Monroe, Michigan.   He had been in ill for several months.

Ralph was born on October 11, 1928, to Joseph and Phebe (Jennings) Schall.   He was one of seven siblings Donald, Earl, Eunice, Richard, Rosalie, and Thomas.   Ralph served his country honorably in the United States Army from 1947 until 1950.   He obtained the rank of Sergeant.   Among his duty stations was the island of Iwo Jima and occupied Japan.

Ralph married Mary Patrick on April 21, 1951, and had three children, Steven (Bonnie), Dennis (Robin), and Ralph (Marie).   He would be blessed with seven grandchildren:  Steve (Jeanne), Heather, Jeramie (Erika), Stacie (Jeff), R.J. III (Jessica), Justin (Christina), and Samantha, who lovingly referred to him as Pop.   Much to Ralph’s joy, those seven grandchildren made him a “Great Papa” eight times over.   Ralph supported his family working thirty-one years at Ford Motor Company where he was a truck driver retiring in 1984.   He was proud of the fact that he had the opportunity to enjoy more time retired, 35 years, then he worked, 31.   His passing was preceded by his beloved wife:  Mary on November 20, 2017; all six of his siblings; and his oldest son:  Steven just four days earlier.

Ralph was an avid gardener and loved to tinker-around on his farm.   He enjoyed buying and trying new plants to test his green thumb and looked forward to receiving his new seed catalog.   Ralph was a member of Saint Gabriel Catholic Parish - Dundee Campus for over 50 years where his wife Mary taught religious education classes for many years.

Due to the unfortunate COVID-19 Pandemic, a private gathering was held at Merkle Funeral Service, Dundee; 297 Tecumseh Street (734) 529-3156, and a private funeral service followed also at Merkle’s led by Father Gerald Cupple of St.Gabriel Parish, St. Irene Church, Dundee.   The family looks forward to celebrating Ralph’s life with a public memorial mass in the future and inurnment will take place at Pleasantview Cemetery.

In lieu of flowers, the Schall family suggests wonderful thoughts be sent their way.   Please compose a special memory to share with them online by visiting www.merklefs.com.

Share Your Memory of
Ralph
Upload Your Memory View All Memories
Be the first to upload a memory!
Share A Memory