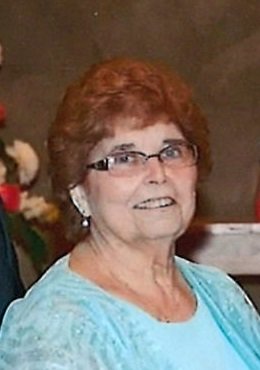 Shirley J. Raymond was born in Monroe on October 21, 1938.   She was the daughter of the late John and Ruth (Rowe) Raymond.   Shirley grew up in LaSalle and graduated from Monroe High School.

As a young woman she worked as a switchboard operator for Monroe Public Schools.   For more than thirty years she was employed by Mason Consolidated Schools.   She began as a bus driver, but would eventually work as the Secretary to the Transportation Director of Buildings and Grounds.   At Mason she met the love of her life, Dennis M. Scheele.   They were married on September 30, 1995 at the First Presbyterian Church in Erie.

Shirley loved her family and would do anything for them.   She was a constant fixture at her grandchildren’s sporting events, and stay connected on her I-pad.   Shirley was caring, understanding, warm, and inviting; never having a coarse word to say or ever getting mad at anyone.

Shirley was never far from her cup of coffee.   Her favorite pastime was crafting, and countless hours were spent in the “Craft Barn”, her backyard oasis where she created beautiful jewelry, painted dolls and knick-knacks.   She worked hand-in-hand with her woodworking husband Dennis, and gave unique treasure to loved ones at Christmas. She looked forward each year to her weekly Fall trip with her Buncho group.

Shirley J. Scheele, age 79, of Erie passed away at 7:35pm, Tuesday, January 16, 2018 at Promedica Monroe Regional Hospital.   In addition to her parents, her passing was preceded by a brother:  Eugene “Dutch” Raymond, and a nephew:  James Raymond.

Memorials are suggested to the American Cancer Society.   Online guests may visit www.merklefs.com.