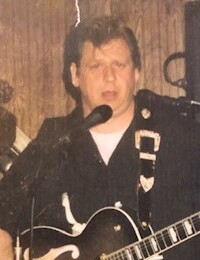 Karl Fredrick Gorham was born in Trenton, Michigan on February 24, 1960. He was the eldest of four children born to Carl and Nancy (Pier) Gorham. Karl attended Trenton High School and proudly served his country in the United States Army Reserves while being stationed in Georgia.  For more than a decade he was employed as a hi-lo driver for Central States Trucking at Detroit Metro Airport.   He retired in 2015.

From an early age, Karl, exhibited a fascination with the paranormal and in extraterrestrials.  He conducted his own extensive research studying U.F.O.’s and dreamed of one day visiting Area 51 in Nevada. The X-files was one of his favorite television programs and he followed Fox Mulder’s life motto: “I Want to Believe”. Karl in excited anticipation counted down the days until the arrival of “Shark Week” on the Discovery Channel. He even decorated his bathroom with a shark theme, down to the finest details. Karl was also a movie buff and especially enjoyed watching action flicks on the big screen. He was an avid reader of Stephen King novels and conspiracy theory books.

An extrovert by nature, Karl could strike up a conversation with anyone.   He was likewise a fan of punk rock music and counted the Clash and the Ramones among his favorite bands. Proud to have been a roadie for Joan Jett he had attended dozens of concerts. To catalog his journeys, Karl, kept his ticket stubs in an album chocked full of legendary shows. He enjoyed performing himself, never passing up an opportunity to sing an Elvis tune, whether it be by Karaoke or along with a live band.

More than anything in this world, Karl loved spending time with his grandchildren who affectionately referred to him as “Crampa”. He was never too busy to play video games with them and he often let the little ones climb on him like a jungle gym. During the school year, Karl walked his grandkids to their bus stop each morning and then like clockwork picked them up every afternoon. He cherished these additional responsibilities and the time it gave him to spend with them.

Karl Fredrick Gorham, age 62, of Dundee passed away at his home unexpectedly on Friday; July 15, 2022. His passing was preceded by his father; a brother: Kenny Gorham; and maternal grandparents: Al and Stella Brandt and Elmer and Alice Pier.

A Celebration of Karl’s Life is planned for September 17th at 3-10pm at Rod Park in Dundee. Arrangements have been entrusted to Merkle Funeral Service, Dundee; 297 Tecumseh Street, Dundee, Michigan 48131 (734) 529-3156. Cremation has taken place through Covenant Cremation of Erie, Michigan.