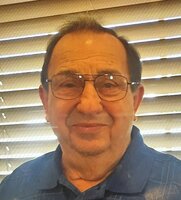 Fred Williams was born on February 4, 1934, in Monroe Michigan. He was one of three children born from the union of Fredrick Arnold and Julia (Simonelli) Williams. After graduating from Monroe High School, Fred would enlist and proudly serve our great nation in the United States Army.  He met his future wife, the former Ruthann Peters and the happy couple would be married on October 25, 1975. To provide for his family, Fred would gain employment for over forty years as a heavy equipment operator with the Dundee Cement Company.

He was a competitive bowler at Nortel lanes and bowled with Ninth place Upstarts. Fred also enjoyed playing softball with Monroe City league for many years.  Fred’s real passion was being a member of the St. Joseph Athletic Club mid-weight boxers and Monroe Golden Gloves-in the Monroe Armory and trained under Joe. Fred also served in the US Army from 1951 to 1954.

Everyone who knew Fred, loved him and he knew just about everyone in Monroe. He was described as the greatest man ever. As a natural jokester, he always was the life of the party, and he had a way to make everyone smile and have a good time. On occasion, around Halloween, Fred would get dressed up and hide in the bushes to scare the neighborhood children.

Fred Williams, age 88, of Monroe passed away at ProMedica Monroe Regional Hospital on Wednesday June 22, 2022. In addition to his passing, he is preceded by both his parents; one brother: Billy Williams; one grandson: Dennis Wolfe; one son: Vic McDaniels; one stepson: Paul Wilkinson.

Friends may gather from 9:00am until 11:30am on Monday June 27, 2022, at Merkle, North Monroe; 2442 North Monroe Street, Monroe, Michigan 48162 (73) 384-5185. A funeral service celebrating His life will follow at 11:30am also at Merkle’s with Deacon Mike Stewart of St. Michael officiating. A procession will follow to St. Joseph Cemetery, Monroe where graveside services will be under the auspices of Monroe Veterans of Foreign Wars Post 1138.

Online guests may leave words of inspiration and comfort or to share a photo by visiting www.merklefs.com.