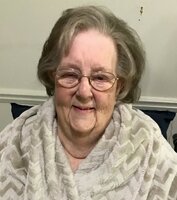 Betty Louise Ellison was born in Monroe, Michigan on February 10, 1934.   One of twelve children, she was the daughter of Forrester Ellison and Gladys (Davis) Ellison.   Betty attended Monroe High School.

She married Howard Johnson on November 29, 1951, in Monroe.   For thirty-seven years, Betty was employed as a Kitchen Assistant at Monroe Public Schools for Aramark and Sodexo.   She also spent nine years as a Kitchen Supervisor for Mason.   She was a wonderful woman of God regularly attending the North Monroe Street Church of God where she was formerly a member of their Willing Workers ministry.   Betty loved to crotchet afghans.   She enjoyed cooking and baking to feed her family.  She was especially gifted with her pies.   Betty looked forward to family functions, and she could be counted on to organize and direct these large-scale events to make sure they went off without a hitch.

Betty Louise Ellison, age 88, of Monroe passed away at her home on Saturday; June 11, 2022, at 8:59am.   Her passing was preceded by her parents; her beloved husband:  Howard in June of 1984; a son-in-law: Luciano Crusi in 2021; a grandson:  John Philo in August of 2007; four brothers:  Raymond Ellison, Curtis Ellison, and two infants:  James Wayne and Robert Lee Ellison; two sisters:  Shirley Eileen Jepson and Mary Lee Platt; three brothers-in-law:  William Tezak, Thomas Platt, and Leo Schmelz; and two sisters-in-law:  Dorothy Ellison and Emily Ellison.

In lieu of flowers, memorials are suggested to the North Monroe Street Church of God.   Online guests may leave words of inspiration and comfort or share a photo by visiting www.merklefs.com