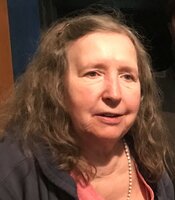 Mary Jane Straub was born in Maybee, Michigan on December 29, 1942.   She was the daughter of the late Carl Frederick Straub and Alma Ann (Gerhardt) Straub Sr.   She was educated at St. Joseph Catholic Grade School in Maybee and attended Dundee High School graduating with the Class of 1960.

Mary Jane married James Spaulding on December 31, 1960 and from this union the couple was blessed with nine children.   With such a large family, Mary, concentrated her efforts as a homemaker caring for the needs of her husband and children.   Mary Jane was a hard worker and led by example to her, “every day was a work day”.   She was selfless, a doer, never one to leave things undone.   Mary Jane was always willing to give of her time and treasures to someone in need.

She loved farming, enjoyed tending to her garden and raising beautiful flowers.   She liked caring for the chickens and cows, as long as they stayed outside.   Mary Jane daily made her way to town and struck up conversation with complete strangers, and hence she became quite well-known throughout the community.

Mary Jane was a best friend to all of her children.   Even as they grew into adults, she continued calling them each day to check in.   She was adored by her grandchildren often babysitting them and certainly doting on them, but most importantly making time for them.   She had also been the main caregiver to her mother for many years until her passing.

She and James were a modern day Bonnie and Clyde going everywhere together.   He was a race car driver and the whole family visited the track to cheer him on.   Together they made memories on numerous camping trips to Northern Michigan.   An avid recycler she attempted to get everyone on board.

Mary Jane Spaulding, age 79, of Milan passed away at home on Wednesday; March 23, 2022.   She was under the care of St. Joseph Mercy Hospice and surrounded by her beloved family.   Her passing was preceded by her parents; her husband of nearly forty-nine years:  James in 2009; son:  Gerald Spaulding; five brothers:  Robert Straub, Kenneth Straub, Richard Straub, Jimmy Straub, and Norman Straub.

In the spirit of Mary Jane’s generosity the family suggests a random act of kindness or a donation be made to the charity near and dear the donor’s heart.   Online guests may leave words of inspiration and comfort or share a photo by visiting www.merklefs.com