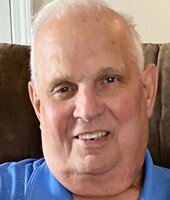 George Franklin McCullough was born on April 8, 1947 in Tyler, West Virginia. He was one of four children born from the union of Frank Junior and Cordelia Mae (Smith) McCullough. As a young boy, George spent every summer in West Virginia with his grandparents, after his family moved to Dundee, Michigan. He attended Dundee High School and graduated with the Class of 1965.

Although George was well known and well liked throughout his community, his family and close friends knew him to be an ornery S.O.B. with a Type A personality. He possessed no filter and a stereotypical truck driver’s mouth. You were never left to wonder what was on his mind. George often said “if you don’t want to know the truth, don’t ask me”.

George had a small circle of friends but was sure to make his weekly rounds to local establishments in his beloved city where he would strike up a conversation with anyone he could. On Tuesday he would visit one of two neighborhood restaurants to have lunch with a friend. On Thursday he would play Euchre at the body shop with his buddies and on Friday he would frequent Texas Roadhouse restaurant.

George had a sweet tooth and never passed on homemade chocolate chip cookies. These cookies were never baked by George, but always consumed by him. George had a fondness for classic cars. The El Camino was his favorite vehicle of all time, which he had owned at one time. George adored his grand puppy, a Miniature Schnauzer named “Lacy” who shared a mutual affection. One of his favorite pastimes was watching western films.

George Franklin McCullough, age 74, of Dundee, Michigan passed away at home surrounded by his family. In addition to his passing, he is preceded by both his parents and one brother: William McCullough.

A Celebration of George’s Life officiated by Pastor Kevin Spencer was held at Merkle Funeral Service, Dundee; 297 Tecumseh Street, Dundee, Michigan 48131 (734) 529-3156 on December 31, 2021. Online guests may leave word of inspiration and comfort or share a photo by visiting www.merklefs.com