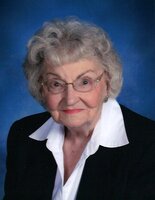 Billie Jean Cribbs was born in Fletcher, Oklahoma on August 6, 1926. She was one of eight children born to Cullen and Sarah (Church) Cribbs. Upon her high school graduation, Billie moved to Erie, Michigan to live with her sister.   She would soon meet her husband to be, Ellis LaPointe.   The couple were joined in marriage on February 13, 1945 at St. Joseph Catholic Church in Erie, Michigan. They enjoyed forty-six years of wedded bliss and cherished the birth of two sons. For more than twenty years, Billie, was employed as a cook at Angelo’s Northwood Villa in Erie.

Billie was a lifetime member of the Erie Veterans of Foreign Wars Post 3925 Ladies Auxiliary and member of the Friendship Club at St. Joseph Church. She played bingo every Thursday at the Water Tower Park Senior Center in Luna Pier, Michigan. Billie also enjoyed taking her chances on the slots at Hollywood Casino in Toledo, Ohio. Although she declared it was decidedly less amusing without the risk, she even had a slot machine in her bedroom! Bille was an avid fan of the Oklahoma Sooners sport’s teams. She often stated that she was “lucky enough to have seen the invention of Direct TV” and frequently tuned into sports games, game shows, and true crime television shows. An outgoing and friendly person, Billie never hesitated to help someone in need. She was very family oriented and loved her sons and grandchildren more than anything else.

Billie Jean LaPointe, age 95, of Erie, Michigan passed away peacefully on Tuesday; November 2, 2021, surrounded by her family.   In addition to her parents, her passing was preceded by her husband: Ellis LaPointe in 1991; two sons: Edward LaPointe and Thomas LaPointe; one grandson: Shaun LaPointe; four sisters: Irene, Geraldine, Aletha Jane, and Geniva; two brothers: Winfred and Bob; and one brother- in-law: Ted Roden.

In lieu of flowers, memorials are suggested to St. Jude’s Children’s Hospital. Online guests may leave words of inspiration and comfort or share a photo by visiting www.merklefs.com.