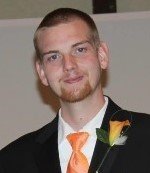 Johnathon Robert Delgado was born in Rochester, Michigan on February 26, 1992.   He was the youngest of two boys born from the union of the late Frank M. Delgado and Jill (Leach) Delgado.   Growing up, John, enjoyed RC Cars and often visited White Park in Summerfield Township for racing.      He attended Dundee High School graduating with the Class of 2010.   He would further his education by attending ITT Technical Institute to study computer science.

Even as John became a man, his passion for cars never waned.   RC Cars were soon replaced with Chevrolet S-10 trucks and his favorite movies were none other than those of the Fast and Furious Series.

John would be blessed with the birth of a son:  Silas in 2011.   The two had an inseparable bond and enjoyed spending time together, often playing video games on the PS4.   John regularly visited the banks of the River Raisin to cast a line.   His favorite fishing partners were that of his brother and father.  For many years they had enjoyed fishing in the Davison/Flint area.

Although, John was stricken with poor health for many years he always put the needs of others ahead of his own.   He was generous and had a good and pure heart.   He worried immensely about those around him and his brother, Bryan, described him best as being selfishly selfless.

To cherish his memory John leaves a beloved son:  Silas Delgado of Dundee; his mother:  Jill Delgado of Dundee; a brother:  Bryan (Sabrina) Delgado of Otisville, Michigan; a niece:  Jillian Delgado; a cat:  Ozzy; a dog:  Dexter; and many aunts, uncles, and cousins.

Private services have been held and no public services are planned.   Merkle Funeral Service; Dundee; 297 Tecumseh Street, Dundee, Michigan 48131 (734) 529-3156 has been entrusted with his arrangements.

In lieu of flowers memorials are suggested to the Delgado Family to assist with funeral arrangements.   Online guests may leave words of inspiration and comfort or share a photo by visiting www.merklefs.com.