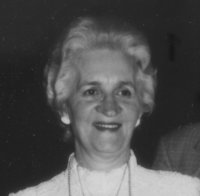 Alice Helene Reuter was born in Wieshaden, Germany on May 10, 1926.   She graduated high school while living in Germany and during World War II assisted as an Interpreter, speaking English, French, and German.

Alice met a young Army Paratrooper and Gliderman, Steve Miletich.   After a short courtship, they made history by becoming the first GI/German marriage of the war on December 5, 1945.   The couple with nine-month old daughter, Eileen, would return to the United States on a nine-day cruise experiencing tough weather and rough Atlantic Seas, arriving in the US on September 25, 1947 via Ellis Island, New York.

Alice eventually would be employed as an Inspector for General Motors Company Willow Run Plant retiring in 1980.

Alice was very outgoing, open and friendly.   In fact, she never met a stranger, and would do anything for anybody.   A faithful member of Holy Ghost Lutheran Church, Alice, was very active with the Ladies Aid.   She was the Past President of the German Club for many years.

She was blessed with a green thumb, gardening her flower beds, bushes and house plants.   Alice was known to be an excellent cook of Serbian and German dishes.   She also enjoyed knitting sweaters, socks, hats, and mittens for children in the German style, teaching many others this way.

Alice and Steve loved to dance and travel, visiting many of the fifty states and returning to Europe.   She always had dogs around, and for more than ten years, Alice, raised and Bred cocker spaniels and showed them for AKC.   She enjoyed mystery novels, television shows, and movies, and loved to read poetry.

Alice Helene Miletich, age 93, of Monroe passed away on Monday, March 23, 2020 at Promedica Monroe Regional Hospital with her loving granddaughter, “Steffie”, by her side.   In addition to her parents her passing was preceded by her husband of sixty-seven years, Steve Miletich on May 11, 2012.