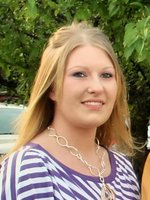 Amanda Nicole Elliott was born at Riverside Hospital in Toledo, Ohio on September 1, 1987.   She was one of three children born from the union of Jon Elliott and Janice (Barnes) Elliott.   Amanda attended Ida Schools and graduated with the Class of 2005.  She would continue her studies at Michigan College of Beauty and later studied medical billing through Ross Business Institute.

For several years, Amanda was employed in the cafeteria at DTE in Monroe.   This is where she would first meet her future husband, Gregory W. Patterson.   The couple would be joined in marriage at the Lucas County Courthouse on December 17, 2018.   Later, Amanda would be employed in Quality Assurance for Diamond Technical Services performing nondestructive examination of welds.

Amanda by nature was always on the go and definitely interested in an adventure.   She loved being outside, with kayaking being a favorite hobby, and dropped in anywhere and everywhere she could.   She enjoyed target shooting with her father and had enjoyed making many memories at the property in Farwell.

Amanda loved to watch dirt track racing, ride ATV’s, shoot pool, and play darts.   She had a special place in her heart for animals, especially her dogs.

Amanda was feisty. She without a doubt had a mind of her own, and try as one might, she was strong-willed and could not be swayed, once it was made up.

Amanda Nicole Elliott, age 32, of Toledo formerly of Ida passed away at home on Monday, December 23, 2019.

To cherish her memory she leaves her husband:  Greg of Toledo; three stepchildren:  Andrew, Lorelei, and Max Patterson of Swanton; parents:  Jon and Janice Elliott of Ida; brother:  Ron Elliott of Ida; sister:  Melissa Elliott (Chad Orndorf) of Wyandotte; maternal grandparents:  Damon and Juanita Barnes of Ida; paternal grandparents:  Robert and Joan Elliott of LaSalle and Teri and Bani David of West Lake, Ohio; her mother and father-in-law:  Mike and Linda Patterson of Swanton; many aunts, uncles and cousins  and her beloved four-legged canine companions:  Chuckie the Pitbull and Arlow the Neapolitan Mastiff.

Memorials are suggested to Lucas County Pit Crew or to LC4 (Lucas County Canine Care and Control).   Online guests may leave words of inspiration and comfort or share a photo by visiting www.merklefs.com.