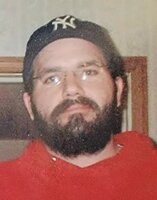 Joshua Wayne Earls was born on April 16, 1979 in Monroe, Michigan. He was the eldest of two children born to Ronald and Joan (Reece) Earls. Josh graduated from Jefferson High School with the Class of 1998 and continued his education at Northwood University.

For eight years, Josh was employed as an overhead crane operator at Great Lakes Steel before medically retiring in 2012.   He was a member of the Monroe Lodge 27 Free and Accepted Masons.

Josh was a movie buff but enjoyed nothing more than watching “The Sopranos” television drama, which he had seen complete more than a dozen times. He enjoyed playing classic board games, such as Chess and Backgammon, along with his friend, Nick. In his youth, Josh spent time jet skiing on Lake Erie and cruising around on his “crotch rocket” motorcycle.

More than anything, Josh loved spending time with his best friend and namesake, his son: Joshua David. They often challenged each other to video games on their PlayStation. Beating his son at a game brought Josh great joy along with bragging rights.   He also cherished time spent playing with his young nieces.  Although Josh was an introvert, until he warmed up to somebody, he was extremely generous and was willing to help anyone in need.   A practical joker, he was well-known for his wit and sarcasm.

Online guests may leave words of inspiration and comfort or share photo by visiting www.merklefs.com.