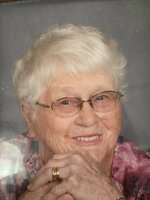 Joan M. (O’Lone) Loss of Dundee, Michigan passed away at Wellspring Lutheran Services in Monroe, Michigan on Friday; October 21, 2022. Joan was preceded in death by her parents: James and Frances (Solek) O’Lone; her brother: Richard O’Lone; and her husband: Max Duane Loss, who passed away in July of 1997 after fifty years of marriage. She was also preceded in death by her daughter, Cindy K. Marsh in August, 2020.

Joan was born in Ida, Michigan on March 18, 1930 and moved to Dundee in 1939. She graduated from Dundee High School in 1947 and married Duane on June 28 that same year. Joan worked at Wolverine Plastics and was a member of the Peoples Presbyterian Church in Milan. She was also a member of the American Legion Auxiliary, Veterans of Foreign Wars Auxiliary, and Dundee Senior Citizens.

Joan and Duane square danced and camped with Joan’s cousins, Mick and Jean Solek. For a number of years Joan and Duane, along with Wyman and Ruth Hanson, were responsible for decorating the graves of veterans for Memorial Day.

Joan moved to Rawson Place in 1999.  She loved playing cards several times a week with the other residents.  In November, 2021 she moved to Wellspring.

In lieu of flowers, memorials in Joan’s name may be made to the Dundee Township Fire Department or Dundee Area Senior Citizens Center. Online guests may leave words of inspiration and comfort or share a photo by visiting www.merklefs.com.